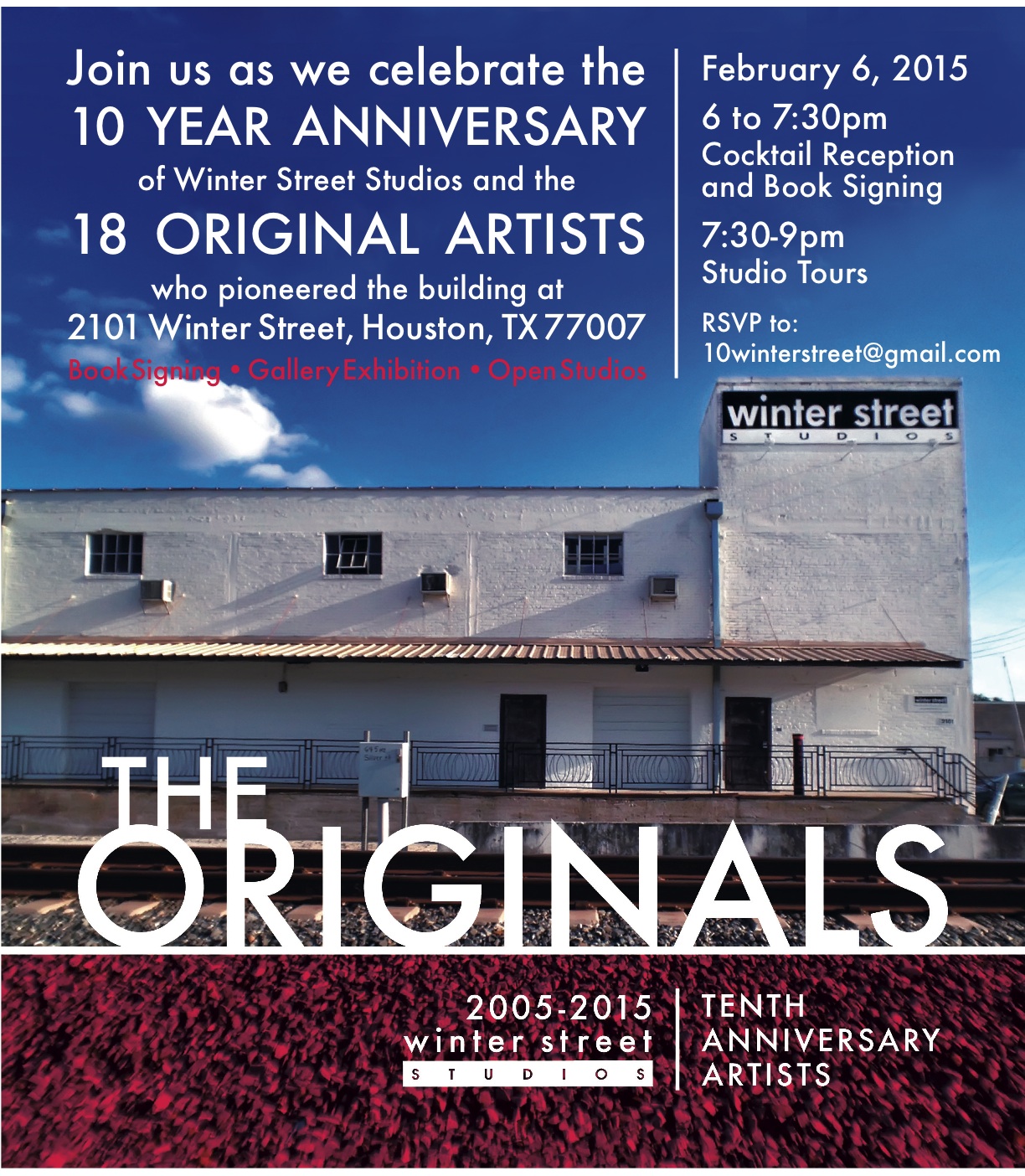 Winter Street Studios ignited the spark that, in about a decade’s time, electrified the area into the largest gathering of working artist studios in Texas.

The transformation started with 19 artists, the “originals,” who recognized the potential early on.

In celebration of Winter Street Studios’ 10th anniversary, a new publication, The Originals, recounts the early days of the project.

Winter Street Studios
Get Directions – 2101 Winter Street Houston
Adjacent to the train tracks in Houston’s First Ward was a run-down old warehouse on Winter Street that â€” as many in real estate often say â€” had “potential.”

Although it would take a special kind of person to imagine the possibilities. Someone who wasn’t afraid of putting in a bit of work and a fair amount of elbow grease to transform something in disrepair into something vibrant.

Today, from the outside, the commercial structure at 2101 Winter St. near the Washington Avenue Corridor still appears unassuming, modest, as though it were guarding a secret known to a select few who aren’t shy about finding their way in, knocking on doors and working through a labyrinth of corridors, stairs and a handful of open spaces.

“I became enamored with the old structure, the poured concrete and continuation of the ‘underground’ use that was already.”
That warehouse, celebrating its 10th anniversary as Winter Street Studios, now has more than 19 reasons to party.

Although 95 artists currently work in the warehouse spaces, the transformation started with 19 artists â€” the “originals” â€” who recognized the potential early on alongside developer Jon Deal and his colleagues.

In celebration of the anniversary, the book recounts the early days of the project. On Friday from 6 to 9 p.m., a book signing, exhibition and reception in the Winter Street Gallery nostalgically looks back at the events that led to the area’s revival and the people who made it happen â€” including Deal, limited partners Todd Johnson and Avenue CDC and Bryant, who was instrumental in bridging the business clique with the local community of artists.

The 75,000-square-foot facility was built in 1928 for the Houston Transfer Company, which specialized in moving, packing, storing and shipping heavy household items. In 1974, the building was purchased by the Siegel brothers to manufacture cultured marble. Their business ended in 1987 and after four years of unsuccessfully marketing the property for sale, the Siegels outfitted the warehouse with a second floor that was dubbed the Art Center, which became home to 30 artists and three galleries.

Silver Eagle Distributors bought the building in 2002. The company, while preparing to expand into its newly acquired space, kept month-to-month leases with the artists, most of whom relocated their workshops to other buildings. A year later, Silver Eagle decided to build from the ground up on another parcel of land, offering the warehouse for sale.

In 2004 developer Deal and limited partners Johnson and Avenue CDC acquired the building from Silver Eagle.

“I became enamored with the old structure, the poured concrete and continuation of the ‘underground’ use that was already,” Deal says, remembering the surrounding neighborhood as raw and undeveloped, without a townhome in sight.

Although the first floor had already been renovated, the structure, which was built in three phases, was in bad condition. Some of the construction was concrete on concrete. The weather changes caused the materials to expand and contract. The building was tearing itself apart.

Deal worked with some existing walls and kept the hallways that were well defined. After other renovations that took a few months to complete, Winter Street Studios welcomed a new wave of artists in February 2005.

The warehouse was at one point scheduled for demolition, except these visionaries had other plans in mind. They sought to turn this blank slate into a creative hub that would attract a bevy of local artists.

Deal is already plotting to create a 32-acre campus of art and entertainment in what he still calls an under-utilized area of Houston.
What they didn’t know is that Winter Street Studios would ignite the spark that, in about a decade’s time, would turn the area into the largest gathering of working artist studios in Texas, thanks to similar ventures like Silver Street Studios and Spring Street Studios. Last year, the State of Texas officially recognized The Washington Avenue Arts District as a cultural district.

“The main thing that attracted me to Winter Street Studios was the spaciousness of the building itself and the size of the individual studios,” Joan Bohn, a tenant at Winter Street Studios since its founding, says. “It had a sense of history that made it appear at once ‘homey’ and yet you felt something serious and exciting could happen there.”

“Winter Street has allowed me to introduce my work to seasoned collectors as well as new art lovers,” she adds. “The ability to work and show my paintings in one space has been very beneficial.”

As for future projects, Deal isn’t done yet. With other landowners in the area, he is already plotting to create a 32-acre campus of art and entertainment in what he still calls an under-utilized area of Houston.